Live-stream experience at the elcg
Slide presentation (summary and photographs) as PDF.

We started with no equipment and no knowledge – now we have some equipment and have learned a few basics, but still quite a way to go.

Since the first stream, the system has been updated with almost no two weeks using the same hardware and software. It is getting better and hopefully, will end up as a stable and much simplified system which is ready to pass on to others; it would be unfair to have someone else learn the kludgy phases of unstable set-ups we have gone through !

Each week is a bit different, but basically Terry drives the content and what we need in terms of readings videos, prayer videos, and even major creations such as virtual choirs. Terry and Elisabeth call around to find volunteers who then video their part(s) – but they do so in many different formats and with varying volume levels, and some which require bits cut off the start or the end. If the volume is all over the place, then we need to add compression for the final edit.

So this gathering and editing is one of the two major parts of the process.
Actually, this first part has become the most time consuming.

Software:
Our first live-stream was with just Youtube, a MacBook and a link to the church sound system to capture the altar and lectern microphones. 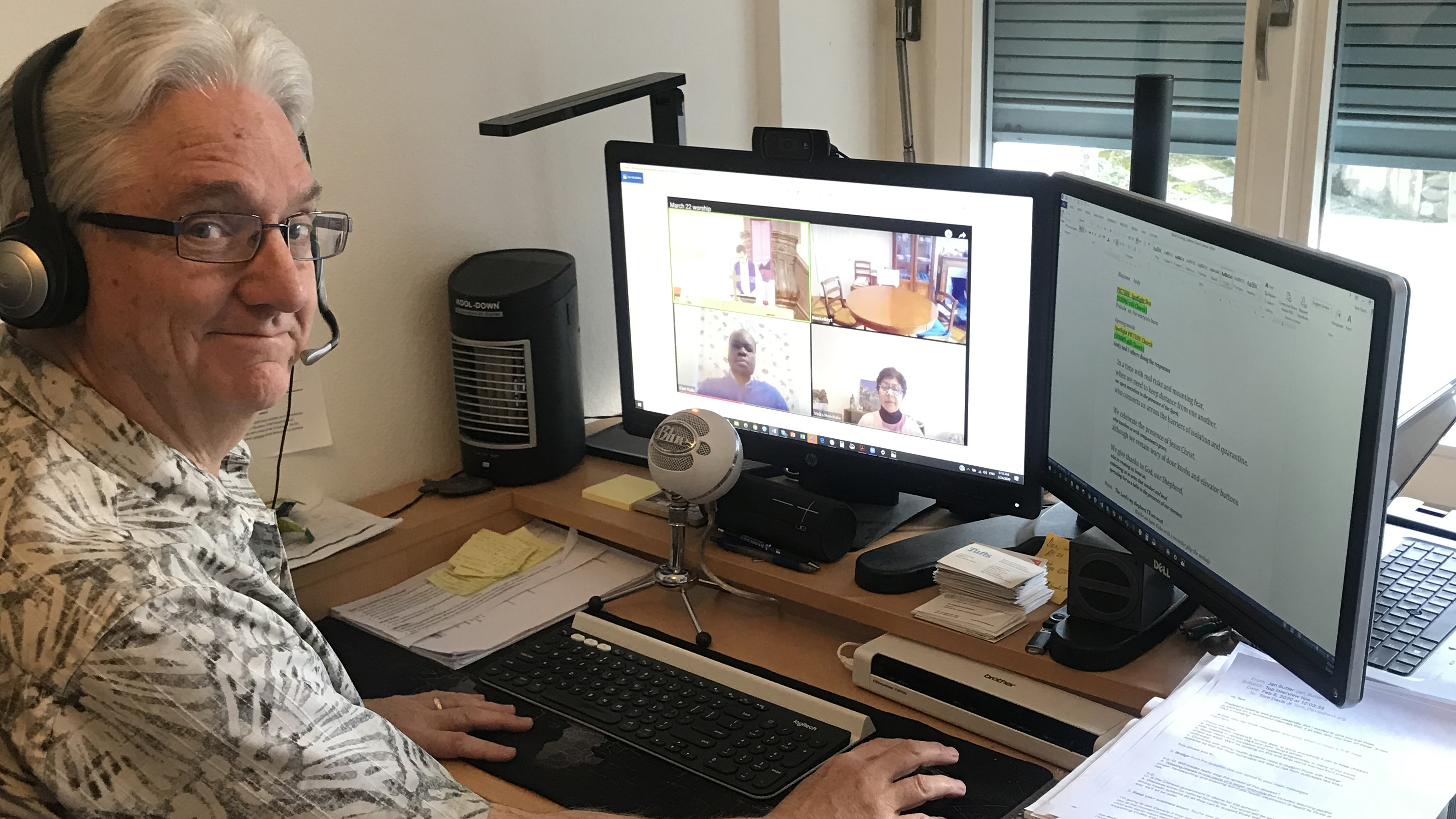 The following week we added Zoom to be able to bring in remote readers, live. Zoom also gives the possibility to link directly to Youtube for streaming, and of course it shows you the camera images before committing them to the stream.  Controlling Zoom for remote readers requires someone dedicated to handle that, which is the role for which Tom Davis volunteered,  nicely implemented a number of times for the ESC.

Then ESC moved away from having live remote readers, to having them prerecorded which is easy to do and less stressful. Readers can still use Zoom, but privately, to record their part, or use any other means they feel comfortable with – like their phone.
The next logical step was to not use Zoom at all, we were using it purely to have a visual preview and to stream to Youtube. 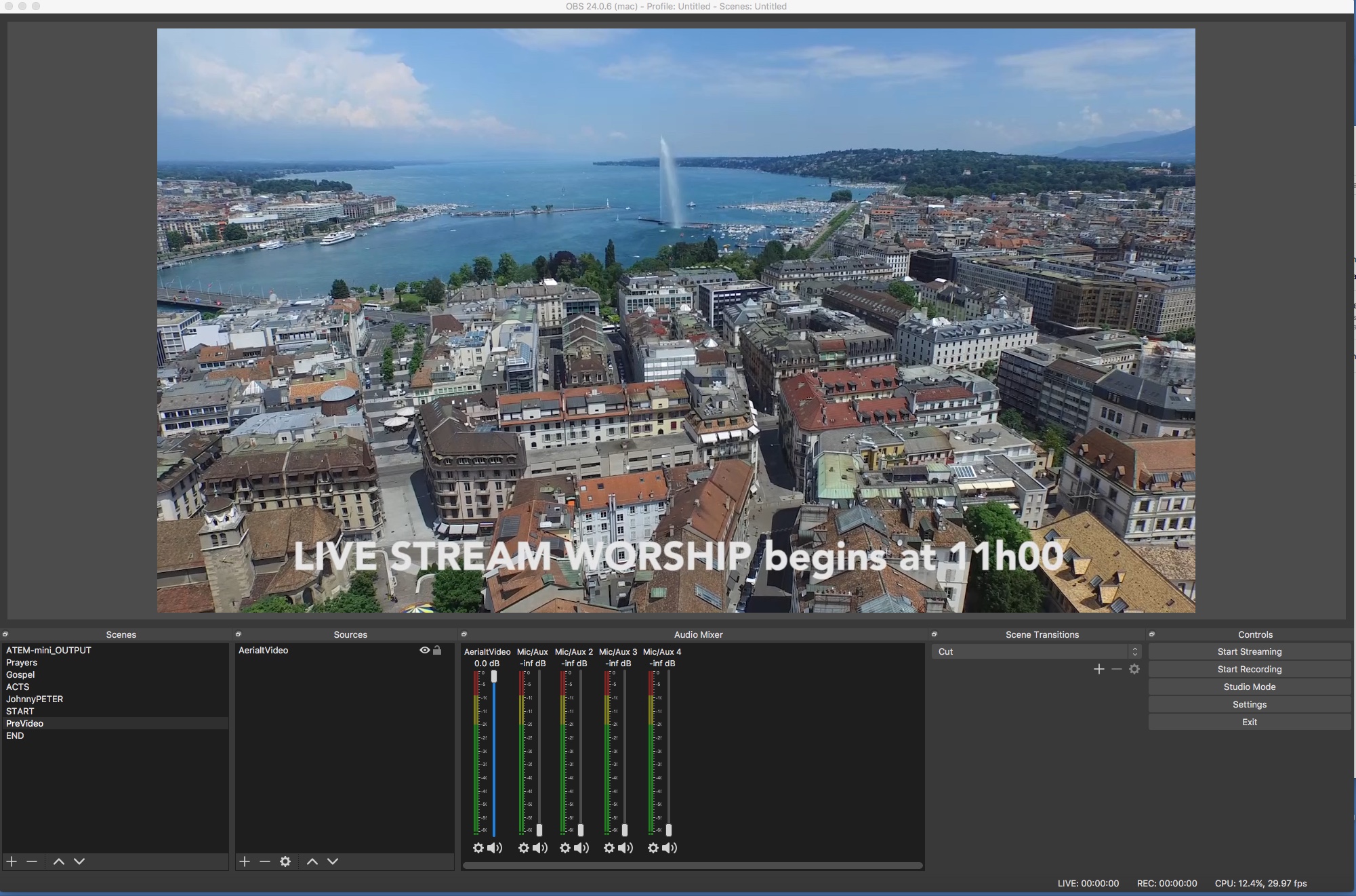 For ESC, Zoom is replaced with OBS studio, a free open-source broadcast software, it does the streaming to Youtube, it links to all the videos and our camera switcher (see next paragraph).  For the moment, GSC continues to use Zoom and remote “live” readers. 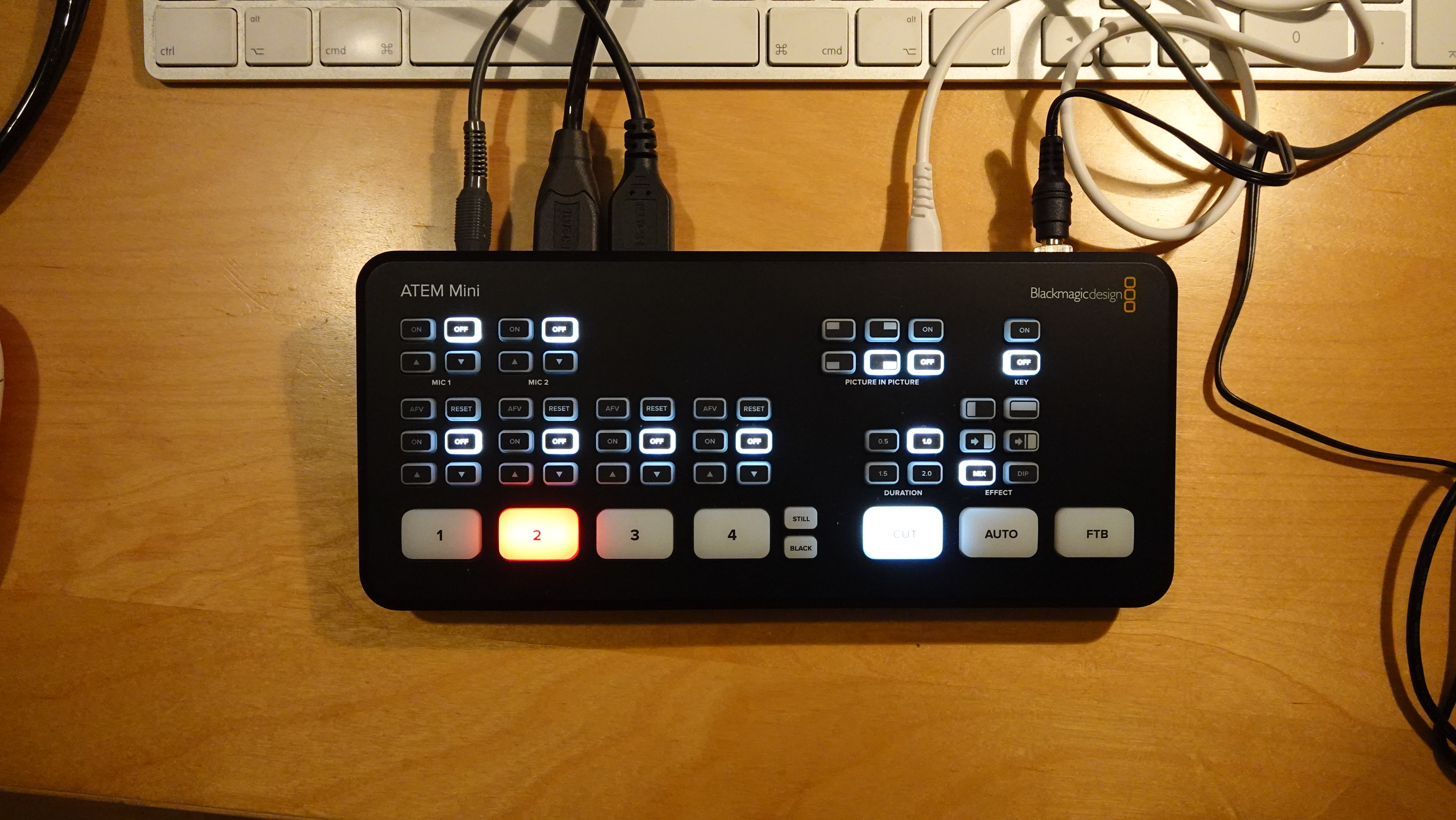 Sanctuary camera switching:
Our first specialised piece of hardware was the ATEM mini  HDMI camera switcher – made by blackmagicdesign.com – an entry level product which accepts 4 HDMI inputs (cameras, video server, etc) and which links to the current software via USB. It has a software control panel all of its own as well. We have found that two sanctuary cameras is optimal. We recently upgraded to two identical Sony AX53 cameras, one contributed by each congregation.

Sanctuary audio:
Our system went through a stage using uniquely my Tascam 6-channel recorder for mixing the sanctuary sound “music microphones” and for sending this mix, plus the altar and lectern microphones to the audio inputs of the ATEM switcher hardware which is the final video and audio “source” which is then passed to Zoom or OBS software.
I also record everything “direct” as I always have done for years, so that we have the best possible quality for making the sermon video and any other videos we chose like a choir piece for example.
But now, for streaming, we have recuperated an 8-channel SoundCraft mixing desk which has been sitting, basically unused, in the organ gallery for more than 25 years – it works well, so now the Tascam needs be turned on only for recording. (That meant buying a multiple channel microphone splitter so that the microphones can be connected to the mixing desk and separately to the Tascam recorder – but that is another story!). So just to say that this is now in use since the fourth Sunday of Easter (3rdMay) and does make life easier especially for the Germans who are using a lot of the same equipment yet do not record.

Microphones:
Altar and lectern microphones are the ones of the church – now unplugged from the sound system (we do not need loudspeakers in an empty church!) and plugged into the streaming system mixer.
Microphones for music are the ones I have used for many concerts recorded in the church and for many private recordings (mainly jazz groups) outside of the church.
There are six of those, we currently use four of them each Sunday.
Those microphones need to be placed each Sunday, typically differently for the GSC and the ESC, depending on instruments and singers.
When both GSC and ESC have worship, the change-over time is short –  not only microphones have to be re-positioned, but GSC use their own computers and slightly different set-up, so the hardware table has to be re-plugged as well – this has caused the most stress, especially if something doesn’t work immediately! We have had moments of panic but only once so far have we been late in getting the stream started.

Monitoring:
Simple as it sounds, monitoring can be complex; we ran a couple of streams without the possibility to know exactly what we were sending!  Both audio and video.
There is no chance of us using the Youtube channel for monitoring because there is around one minute of delay between what we send and the time it gets “on the air”.
Best we did at the beginning was to have a couple of friends texting messages if something went wrong – but usually we had fixed it by the time the message came through!
So we can monitor only what we SEND to Youtube and that is as far as we have any control – things do go wrong after that, but nothing we can do, we are at the mercy of the Youtube network and how loaded it is at time of streaming. It is possible that quality and often lip synch is bad, some of that is corrected by Youtube on the recorded version they place instead of the live-stream after the fact – but not always. I have the impression that since around mid-May the Youtube stream quality is better.
Finally we can monitor video in the sanctuary so that Andy and Terry see exactly what I see (the screen was recuperated from the church cellar – used to be in the side window of the Rue de la Fontaine!).

I have now a headphone monitoring point from which I can hear everything audio we are sending – but the others in the sanctuary cannot hear, for example, what the remote readers are saying. We tried connecting a loudspeaker but then if accidentally left turned on it creates a difficult delay for Andy speaking at the altar, so we preferred to rely on a visual cue when the reader is about to finish.

Is the hardware / software system now in its final form? 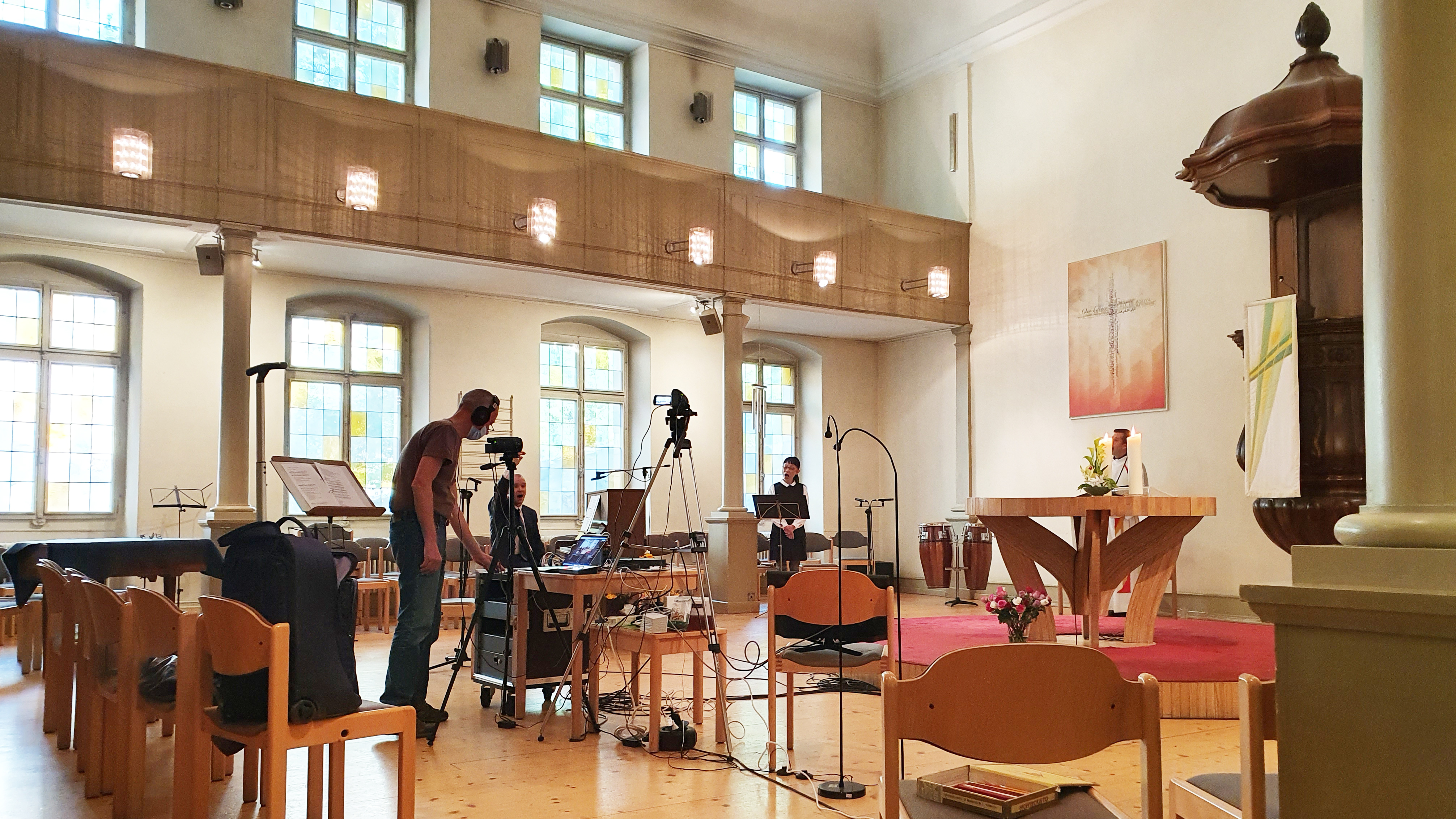 In essence, yes. But it remains a bit “kludgy” and thus can hardly be seen as a “product”. We now see how difficult it is to go through all the aspects of its operation, and to explain areas where something could go wrong and how to recover. Plus, we don’t know all the answers, sometimes we are surprised by yet another illogical failure or something changing without notice or apparent reason.

We have seen quality problems on the final stream – are things better now?
As of our second or third stream, we have been bugged by audio/video synchonization issues and even total failure of the stream during one of the GSC worships.
Since a few weeks the Youtube stream has improved quite dramatically and seems now to be back to the high standards we witnessed before the COVID-19 confinement period. So I can only imagine that even Youtube with their incredible network, high bandwidth, and good reputation (taken-for-granted most of the time) have suffered from their success and have been overloaded with the huge increase in working from home, gaming and video watching at home. Not to mention churches running live-streams at the same time!
I can only re-iterate my message to a number of  people, that we have absolutely no control or influence over the stream quality once it has left us to go to Youtube. We have had cases where our live stream has been out-of-synch (I mean a lot out of synch, not just a little bit) and which has been corrected on the recording which Youtube provides afterwards. So that doesn’t help those watching live but does show that some errors are recoverable.

More photographs and information on the illustrated PDF file